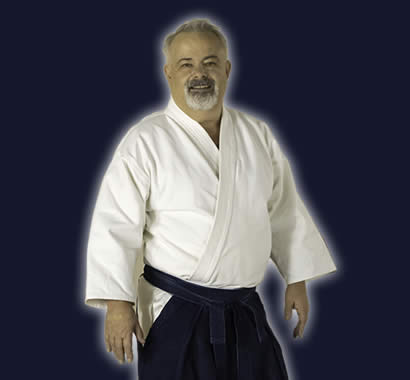 Mustafa Aygün (b. 16.1.1963), founder and chief trainer of the UAO (United Aikido Organisation), was born in Montenegro, (F) Yugoslavia.

In 1969, he moved to and settled in Turkey with his family.

In 1977, he started practicing Shotokan Karate then continued his martial arts training with Judo.

It was in 1983 that Mustafa Aygün came into contact with Aikido, which he embraced as a way of life.

Mustafa Aygün practices Aikido without any interruptions since 1983.

He visited Japan in 1989, where he took the opportunity to train at the Aikido HQ with the greatest trainers of the time.

It was upon his return the very same year that he decided to manage Aikido professionally.

From then on Aikido and his life became one.

This way, Aikido found its way into the lives of many people -thousands to be precise. He secured the traditional way of Aikido training in various cities of the nation thanks to scores of black-belts he raised.

Mustafa Aygün practiced, and trained and raised many trainers not only in Turkey but in many other parts of the World including Macedonia, Lebanon, Azerbaijan, Cyprus, Kosovo, Austria and now in the UK, and not to retire.

In time, the UAO has become an umbrella organisation in diverse countries for many people aspiring to share the same spirit and practice Aikido without any diversion from its traditional values.

United Aikido Organisation led by Mustafa Aygün enjoys a fruitful and close relationship with Aikikai, the Aikido HQ governed by the Ueshiba family. All black-belt aikidoka within the UAO receive their Dan (black-belt) degrees directly from Aikikai, certified and undersigned by the Aikido Doshu.

United Aikido Organisation is an authoritative body, recognized by the Aikikai.

Mustafa Aygün is a proud student of Kumagai Kenji Shihan, unwaveringly, since day one until the end of his life.

Mustafa Aygün holds a 7th Dan degree awarded by the Aikikai. Mustafa Aygün is a university graduate and fluent in Turkish, English and Serbian.